My Big Gay Italian Wedding is the story of Anthony Pinnunziato, a young Italian-American man from Brooklyn, who wants to marry his boyfriend despite a series of hurdles put in place by his colorful Italian family. Veronica plays the role of Maria Pinnunziato, the groom’s fiery little sister. She dreams of becoming a Broadway star and she takes any opportunity she can get to prove her talent – unfortunately, she’s ridiculously unskilled. Her brother’s wedding coordinator happens to be the celebrity Maurizio Lagrande (played by Kevin Cough), so the ceremony becomes for Maria the ultimate audition to a life of fame. Between a highly melodramatic Cher rendition and very hip hop Ave Maria, Veronica lights up the stage with a performance that is equally whip-smart and deliciously playful.

The show is produced by the Italian Comedy Club of Los Angeles: a theater company whose mission is to bring the excellence of the “Made in Italy” to American theater; showcasing the history, tradition and culture of the motherland on stages of both coasts. Together with Veronica Maccari, are other fellow native Italians – Gianfranco Terrin, director and lead of the play, from Naples, Serena Limonta, from Monza like Veronica, Luca Della Valle, from Caserta, and Carlo Carere, from Naples. My Big Gay Italian Wedding is also supported by former soccer star Alessandro Del Piero, who hosted the cast and audience at his West Hollywood restaurant, N.10, to celebrate opening night.

For Veronica, this is an exciting theater experience on the West Coast, after working for various theater companies in New York, such as Shakespeare on the Sound, Times Square Arts Center and Tribeca Performing Arts. During her time on the East Coast, Veronica worked on multiple films and commercials; in 2015 she went to the prestigious Festival de Cannes with the short Samantha, in which she starred as the lead. In the last few years, however, she has focused on Los Angeles, starring in indie projects such as Foreigners’ Tales, Nightmares, I was Frida and A Teaching Opportunity. “I’m finally onstage again with My Big Gay Italian Wedding”, says Veronica, “And what a stage too: it is an honor to be able to perform at the historic Hudson Theater, right in the heart of Hollywood”. But the Monza-native is already working on her next character: “I’m rehearsing for the play The Father, written by Florian Zeller. I’ll be playing Laura, the young caregiver of a man affected by senile dementia. I’m thrilled for this new challenge: this is a play that makes you laugh while it shatters your heart in a thousand little pieces. I saw it when it came out to Broadway in 2016 and fell in love with it. That year it was nominated for the Tony Awards for Best Play! It’s a must see.” Veronica will be onstage in The Father in May at T.U. Studios in North Hollywood. 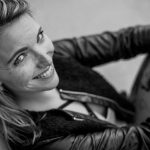